Take it up with Star Fleet, lady!!

Welcome to nokilli.com, no wait, that's nokilli dot khaaan. It's such a happy world we live in.

It's been a while since we've updated anything here. People say, "I thought you broke up years ago". We quit looking for shows years ago but we'll sometimes play when asked. There are 6 of us in this band, and we're all lazy.

We joined Creative Content. It basically says feel free to use our songs as long as you're not a Ferengi about it. You can use it, transmit it, play with it, abuse it, remix it and do what you want as long as you're not making money off them. As an example, the stuff that ChurchHatesTucker put on youtube.

This music free to share under a Creative Commons Music Sharing License.

The No Kill I is a Star Trek punk rock band that's been around since 1993. Don't ask me why, because I sure as hell don't know, but we were a Hogan's Heroes band for a little while. Shows are usually pretty out of control what with the booze and the destruction and the flames and the costumes and the fights and the blood and the gore and the spitting.

From a show at the Capital Garage, "That wasn't even funny, they're just a bunch of drunks."

We celebrated our 10 years as a band being filmed for Trekkies 2 on July 26, 2003. I'm sure you must've seen Trekkies. It's pretty danged good. It would've been better if they filmed us for the 1st Trekkies back when we were young loudmouths, because now we're all old retards, but gabba gabba hey...

The best quote at that show was after Cap'n Kirk had his pants pulled down. Some random girl, "He's got prettier panties than me!"

Check out other show reports.

This chuckleheaded site is mostly written by a chump with a hole in his head (another true story), there's pictures and vital info scanned in. Names and places and events known to none but ourselves. I use "known" in a theoretical sense because Gornzilla, the Cap'n, and The Abe Lincoln are usually playing blacked-out drunk. No, really. It's quite professional and if you don't remember doing something, you don't regret it or even have to apologize. It's a lot like going back into time. Time traveling through a bottle.

The Singing Sassmaster - Cap'n Kirk. Or Cap'n Pike when he broke his leg and played in a wheelchair. We spray-painted a box black and stuck it over him. He sat there looking vacant flashing his lights. We had to pour beer into him. I love being in this band. Cap'n James Tequila Kirk.

Guitar Geek - The Hard Drinkin' Abe Lincoln (if you catch that Star Trek reference you really are a geek). Formerly Red Shirt Expendable Guy. Used to be Trekkie Guy. Used to be "Dr. McCoy" with quotes, natch (not quote snatch). By the way, the real Hard Drinkin' Lincoln is available on the internet. Look for it. Well worth the 2 bits. Mr. Wong is even better and was also done by Icebox.

For a while, Mr. Spock was in Amok Time (Logan, we have a runner), and we had The Orion Slave Girl Whom No Man Can Resist on drums (s/he's too sweaty so we left shim on the Planet of the Ding Dang). 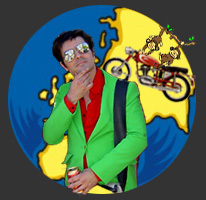 Geek Around The World! The Gornzilla dork who wrote most of this site is riding a 40-year-old Ducati 250cc round the world. He started in October, 2004, blew up his bike in February 2005 (all hail New Zealand!) and is back in Sacramento saving up for 2008 -- Round 2: across the US, to England then Europe, Asia, and back to California.